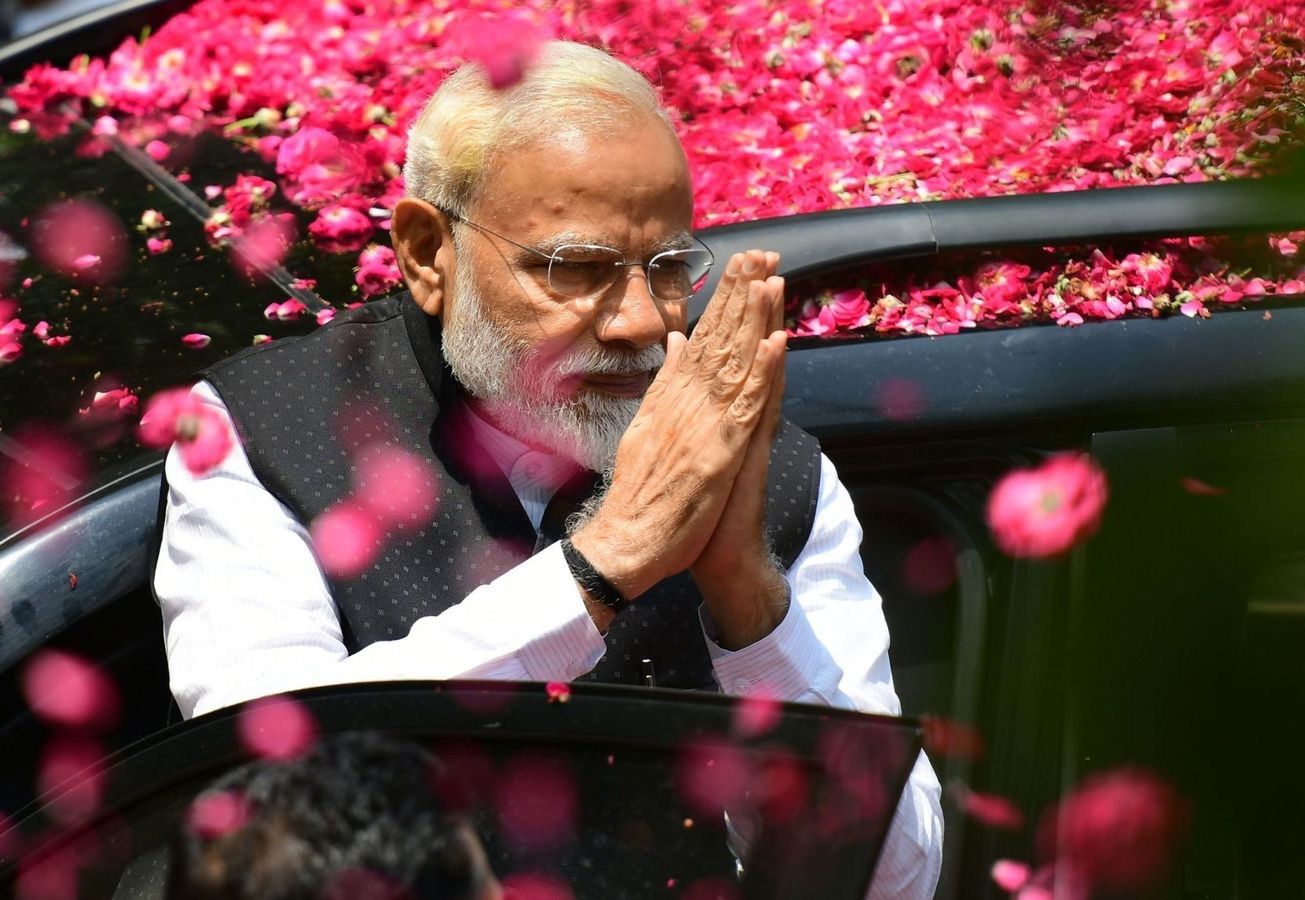 This was a revolution, an epoch-defining moment in India’s post-1947 history and what is stunning to me is just how out of touch and clueless the deracinated anglophile ‘elites’ just were to this ground shaking moment.

In fact, I am being uncharitable to King Louis XVIth, 3 years before he lost his head, he recognized the severity of discontent and called a meeting of the estates general and asked them to submit Cahiers de doleances (ledgers of grievances). He promised to action these, but sadly for the king, he was still a little too late. The long-oppressed bourgeois classes and the peasants were too angry to be assuaged by this and 3 years later the King and Queen both lost their heads.

The current opposition and I include the Khan Market gang (thank you Modiji for this phrase) here didn’t have the prescience King Louis had, they remind me of Hitler in April 1945. Surrounded by Soviet troops, Hitler in his delusional world was convinced that he was winning. His enablers, toadies like Goebbels (Lutyens Media?) Himmler, Hans Krebs, etc didn’t even bother bringing the Fuhrer down to reality. They instead enabled his delusions, promising him that his genius alone will help defeat Marshal Zhukov and his 1 million troops. Anybody who said otherwise was called a traitor and summarily dismissed from service. Till the day he shot himself, Hitler believed victory was just around the corner. He died thinking he would have won IF not for a few pesky Wehrmacht generals who interfered with his genius.

Our Rahul Gandhi lived in a similar delusional world, aided and enabled actively by the ecosystem who to this day are unable to accept these results for what they are. His world view was clouded by such prurient and puerile garbage like “Rahul defeats Modi on Twitter”.

From Sept 2018 on, I counted 5 different such articles. Or how cheerleaders like The Wire, or the talking heads in NDTV all declared Modi dead, and how the economy was in a coma and how the subaltern class would overwhelmingly chase out this uppity upstart and cast him into exile. You read endless op-eds on how Mr. Gandhi / Mamta / Maya etc represented the idea of India and how Mr. Modi represented the ‘other’. The message was clear, Modi was the pretender on the throne, and the IoI was safe only when the default program, the Cong was in power in the center. Or the “Rahul is coming of age” nonsense. I counted 20, yes 20 such articles from 2010 on. So apparently Rahul Baba comes of age 2 times every year like clockwork and as in the case of the emperor who wears no clothes, they all pander to Rahul the legendary leader.

They are convinced that his appellation Pappu is something the BJP IT cell made up, not realizing that the average Indian, esp the average young Indian derides him as a no good talentless hack who got to where he is only because of who he is.

With the numbers now clear, you realize that all these pages have aged like milk left on the terrace of a hot Chennai day, does….very poorly. Which begs the question, how did so many allegedly intelligent people misread something so epoch-making?

The intelligence is what needs to be questioned because in India in general and amongst the literati and intelligentsia in particular, the ability to communicate in English is directly proportional to your intelligence.This is why airheads like Swara Bhaskar or even literary heavyweights like Arundati “Rafale carrier” Roy (no complaints on her writing here though) were given so much air time. They are disconnected from the real subaltern and indulge in what is politely called a ‘circle jerk’.

They live in their own echo chambers, and as a Tambaram, many in my own circle live in a similar echo chamber and it is spectacular on how delusional and disconnected they are. Anybody gainsaying them is branded a filthy Sanghi.

Derided for being ‘low IQ’ and if the exchange continued, it is shut down with the magic words “guamutra bhakth Sanghi”. This same politically correct class would shy away from using words offensive to Jews (kike), Blacks or Muslims, but have no qualms in abusing the Hindu RW. Thus isolated and insulated, they crafted their own narrative on how Demonetisation caused 1000’s of deaths, and how Modi is hated by the poorest Dalits, that intolerance is rising so the fence sitters will also switch sides.

Armed with this ‘knowledge’ you then got farcical analysis like the one Wire put out on UP where they took the assembly election results, added the SP + BSP vote share, compared it with the BJP vote share and decided….Modi is done for, GGWP.

Anybody with even the slightest interest in Indian politics knows that vote transfer between antagonistic vote banks like Dalits, Jatavs, Yadavs, and Muslims is not seamlessly done and there would be massive slips.But not to these ‘intellectuals’, they were absolutely convinced of their methods and outcomes and this then was fed to the key opposition leaders which lead to even more farcical things like how Rahul Gandhi said “he destroyed Modi’s identity”, vigorous hand gesticulation included.

Like his handlers and advisors must have taught him and like GoT season 8, it made for a stirring thing to watch….but that was all, in reality, it was shallow and lacked all substance, something May 23rd proved in spades.What’s shocking to me personally is that, rather than submit to the defeat, after all, it isn’t final – King Narasimhavarman came back from a crushing defeat to taking the Chalukyan capital. The Cholas came from being small vassals to the Pallavas to becoming a superpower.

Simon Bolivar lost so many times, was exiled 2 times, and yet every single time he picked up, learned from his mistakes and fought on. Defeat is not shameful, defeat is an opportunity to pause, understand what went wrong and then fix the mistakes.

The BJP itself is a shining example of that. They ran an insipid campaign in 2009, didn’t have clear campaign goals, and only vaguely aligned behind Advaniji, but it sat back, studied the mistakes it made and in 2013 itself Modi was made the PM face.

And with razor sharp focus ran a campaign that ran rings around the opposition. In 2019 though, the process began 5 years ago itself. The model was the 2004 loss, and how to avoid the mistakes Vajpayeeji made.However, neither the Cong nor its enabling ecosystem has the humility to accept this verdict, and the scale of it, instead of being a bucket of cold water poured on their head (no, not the ALS challenge please), it has reaffirmed their belief system.

If you look at all the sour grapes messages and op-eds (The Wire and Sid V leads the way again) or NDTV on May 23rd (I have been to funerals that were more cheerful) that have been pouring out, this clique is convinced that their princeling was defeated by foul means.

That somehow a small minority of “savarna” Brahmins and landed elite gamed the system and deprived poor Ragul Baba, the heir of Negruji his divine right! Messrs Modiji and Shahji are laughing their way to the vote bank because with this attitude of the opposition, they just won 2024 as well.

I will let that doyen of the Marxists do the talking, Gayathri Spivak once wrote (and I paraphrase from memory so don’t quote me on this), “The marginalized are the silent and silenced center, the poorest of the poor, the illiterate peasants, the tribals and the urban sub-proletariat”.

The Congress, Marxists and “left Liberals” always designed to speak on behalf of this subaltern class, the poorest of the poor, the sub-proletariat, but on May 23rd, the Silent and Silenced Centre spoke, and resoundingly….in favor of Mr. Modi.

The mortal conflict now within the pluralis maiestatis is clear, are the subaltern that they claimed to represent (though how an anglophone, upper class Indian could ever represent the poorest of the poor is beyond me) suddenly a ‘gaumutra sipping Sanghi bigot’?

The subaltern though doesn’t care, this is a vote, a vote for hope, a vote that rejects the status quo ante of Nehruvian secularism and most importantly a vote against the same dynasts and elite who claim to be their voice.The message is clear, ‘don’t give us homilies and slogans’, give us roads, electricity, toilets, doles without the commission and let us build our own lives. A new beginning indeed! Vetrivel Veeravel!